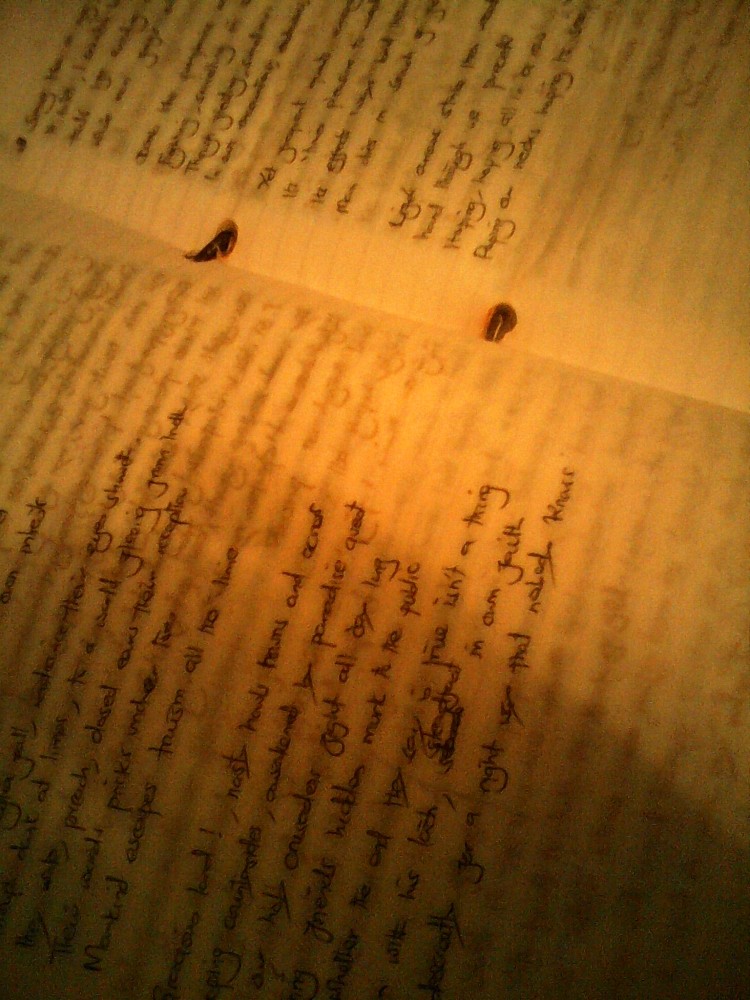 There are poems I wrote when I was 17 years, now I am 30 years old. Some are mediocre in the sense of style but most are not, many are heart-felt and honest I think. Most are definitive of that phase of life and radiate snapshots of a hungry learner. Viewed together, as a part of a single trajectory that is the growth and transformation of a single poet, they definitely occupy a worthy space. You don’t want to lose them because you know they mean much more than just a starter course in a long meal of betterment.

You may even begin to question the very essence of what ‘a better writer/poet’ actually means. Is it dexterity in style or honesty in voice – despite the awkwardness of the baby steps? Or is it learning how to present your thoughts, in a specific time, in a specific space, in the best way possible – with regard to your contemporaries? And when you eventually decide to publish, in the sense of sharing your works with readers other than yourself, it is with judiciousness that you select poems you think are representative of ‘the current you’ or ‘how you’d like your readers and peers to view you’ and a whole set of you in different phases is (unfortunately) consigned to oblivion. They will remain unread and unheard forever. Probably when you die and your next of kin turns over the thousands of pages of ‘what was written and never published’ to your best friend (who if you are lucky may know what to do with the ‘works’) then they may finally be consumed by people other than you. And if they are good enough, you may earn posthumous fame. But you will be dead and the dead have no practical use of fame.

Performance poets or spoken word artists are excused from this torment. They write and release it on stage to be consumed immediately with its many perfections and imperfections. The next performance provides an opportunity to better the context and delivery. They ascend to a new rung on the ladder of ‘betterment’ and the process goes on and on until 5 years later, once can logically see the steps that made the quintessential performer the person they are today. You will see that it is not an accident that they are good at what they do. You’ll appreciate the years of work that went into perfecting the art. The downside is that for a poem that is written and not performed immediately, better poems by the poet soon relegate them to a box of irrelevance or quiet ridicule, without an opportunity to be seen or heard.

“I wrote this ten years ago”, the poet will say leafing through a yellowing note book. He will recognize the person he was then, how many skins he has shed and specific verses may help him locate the specific experiences during that time. These poems, therefore, are to him chronological snapshots of artistic transformation. But there are also poems written when one is young that remain irreplaceable, whose content is mature and style borrowed from years one is yet to live.

I’m reminded of “The Coming Poet” preface that Immanuel Iduma wrote on Dami Ajayi’s chapbook “Daybreak & Other Poems”, especially his ideas that performance can be the voice of a poem. He says:

“There must be something about our post-literate world that is equally an important  consideration for the poet. Literacy as we know is prescribing a new approach; it is fraught between the demands of YouTube, Tumblr and Pinterest, today’s sites of graven images. We learnt through our ears, and then with our eyes, now it is a combination of both. This is the crux of the poet’s challenge today. He has to be seen -and-heard. Performance will have to be his voice; otherwise his poetry will remain written.  If the poet wants an ego-massage, he must seek a hybrid-form; a poem that is written that can also be spoken.”

I’m one of those poets with poems they wrote more than a decade ago, some of which are a decent start I think. I wrote this poem when I was 18 years old, more than 10 years ago:

Intelligence and cynicism hidden behind the round spheres,

They watch, doze, and watch again,

Their brains muzzy, but steadfast in faith.

Wishing in a world ‘short of paradise’,

In abstractions they drown.

The world’s good, yet dangerous to mankind,

People are good, yet selfish and self-interested.

Though darkened at times by a world in flee from truth,

They write and preach: closed ears their reception,

Man evades truism all the time.

Whether the end they say is true, isn’t an issue:

Every man with his torch, steadfast in own faith

Walks discreetly towards the right way that nobody knows.

I wrote this one when I was 17 years old. How years run?

Why be a Poet?

Why be a poet?

When the meanings do not mean,

When the poet’s lyrical torrent is prickly thorns,

Why? When I cannot blast the truth,

And hear a following so grand?

Why? when I cannot write,

And live by the bread from it.

Though distressed that this salve cannot heal again,

I’m tempted to bury this statue of poetry,

For its rotten trunk has started to smell.

But I’ll let it stand a while.

But, my words remain cast to you,

I curse all for pushing poetry into dustbins,

For muffling literature so glorious.

These are the worries that beset me,

That I may not live to enjoy my forte,

That I may not recede into my sanctum,

And emit messages to calm this tempestuous era.

These are two poems of the many written more than 10 years ago when I was much younger and which have never been published anywhere in any form. It also means that there is no ‘feedback’ or response that has ever been received on these poems – simply because they have never been shared with anybody.

I’m now 30 years old now. So much has changed (on who a poet is or the power of poetry to transform living experiences), yet so much has also remained the same.

As I grow and encounter different lives and experiences of poems, the way I write and what I write has been changing. The change has been radical over the past 5 years and the anguish of shedding old skins to try new ones has been real. What do I do with shed skin? I had a manuscript, a collection of poems written up to around 2010, one that was very specific in scope and which strove to tackle specific issues in my contexts, and which after sending to various Kenyan publishers and getting the cold shoulder, began yellowing in my hard disk.

This manuscript has poems written between 2007 and 2010, a period in which my mind travelled deep into African and Kenyan politics issues, philosophy and religious discourses, especially since 2009 was the first time I read the Koran and the Bhagavad Gita and a whole set of esoteric texts. Because of procrastination and my life being tugged away by radically different pursuits, a lull ensued and the push for publication took a back seat. I have been thinking of them, maybe publishing them as Chapbook as a kind of an exorcism of that past, of that life and the poems that were produced in that era – whether they are good/bad/acceptable/serious/bla blab la.  I honestly fear that if they don’t gain legs and walk around, my ideas/thoughts/productions during that time and space may be lost forever. Whatever they are, maybe they deserve to be read and discussed. I don’t know the specific orientation my writing may take tomorrow, histories are made as lives progress, and maybe this should be the right time to open a door to that past.

Still, in your own life as a creator, where do your old unpublished poems (and stories) go? Do they acquire a life of their own and live undeterred in the darkness inside box locks or digital backups? Are they historied or they die off and reincarnate as new poems and stories?

3 thoughts on “Where Do Old Unpublished Poems (and Stories) Go?”