When I was about 15 years old, when herding cows in the village, I used to walk around with an old book titled “A Short Defence of Religion: Chiefly for Young People Against the Unbelievers of Our Days” by Prof. Rev. Joseph Ballerini from the Seminary of Pavia. 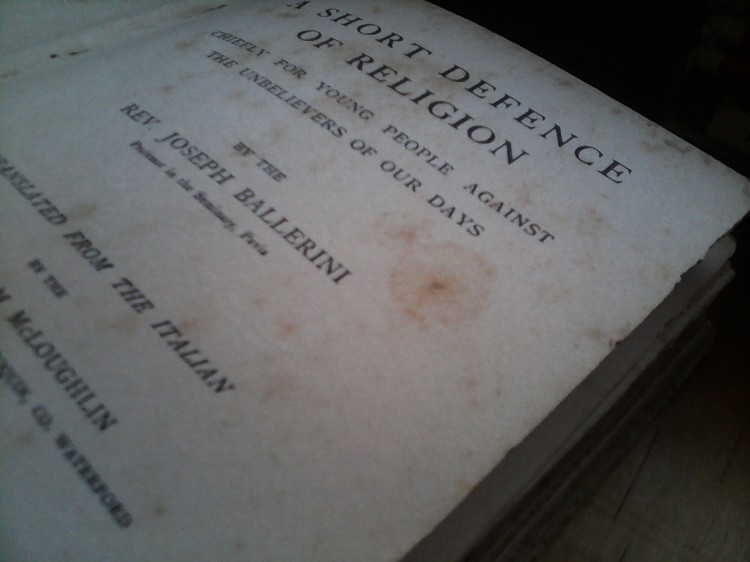 Got it from one of the Catholic books Dad had. It’s a very good book, but not short as the title implies, and I think the best defence of the Christian doctrine that I have ever read. Even today I still have the book. It’s a very old book, was first published in 1908.

The preface of the book begins this way:

“It is proper that Catholics should not only have a good knowledge of their religion, but also to give a correct and satisfactory answer to honest inquiries of non-Catholics. At the present day there are great discussions everywhere on matters connected with religion, and immense multitudes of people take erroneous views. Unfortunately, it often happens that Catholics are not in a position to remove their difficulties.”

The book intended to weigh the arguments of guys like Darwin, Huxley, Tyndall, Spencer, Harnack, Loisy etc to show how they are totally unworthy. So at 15 I was already reading arguments and counter-arguments on existence of God, origin of man, origin and nature of human soul, which is the true religion bla bla. Some arguments are logically sound, especially in those cases where he tries to prove that there is no conflict between Catholic dogma and scientific evidence, such as in the evolutionary origins of man. Back then I could see many of the weaknesses in the Professor’s arguments, it was not until I did Biomedical Science and Technology for my Undergraduate and this made it easier for me to access and understand scientific data and findings, and also see the deliberate misinterpretations that the good theologian had engaged in. But the book is way above, in terms of quality of reason and logic, when compared to most of the books defending Christianity that you’ll find on the bookshop shelves today. It is rigorous. It has citations, and very detailed footnotes on direct quotations from books you can hardly find anywhere.

I tried to think about why an organized religious system, like the Catholic Church, would write a book to shield ‘young people against the unbelievers of our days’. Later on I got English translations for Quran and Bhagavad Gita, and downloaded Buddhist texts and books on ancient history, ancient religions and cults and so many many other things. I think nothing exposes the fact that religion is a sociocultural human construct like studying many religions and cultures.

Since 1950s science has produced so much knowledge about the nature of the physical universe that most of the arguments in this 1908 book have been rebutted in millions of discussions in blogs. The Table of Contents of the book is like a summary of the religion-science debates even today, the only difference is that science has shed off most, if not all, its philosophic abstractions and has become more empiricist, more mathematical, more observed data. The usefulness of scientific arguments, tools, and technology can be seen in every sphere of our lives. Sadly, arguments for many religious doctrines still gamble with belief and piggyback on base human instincts such as fear of death. 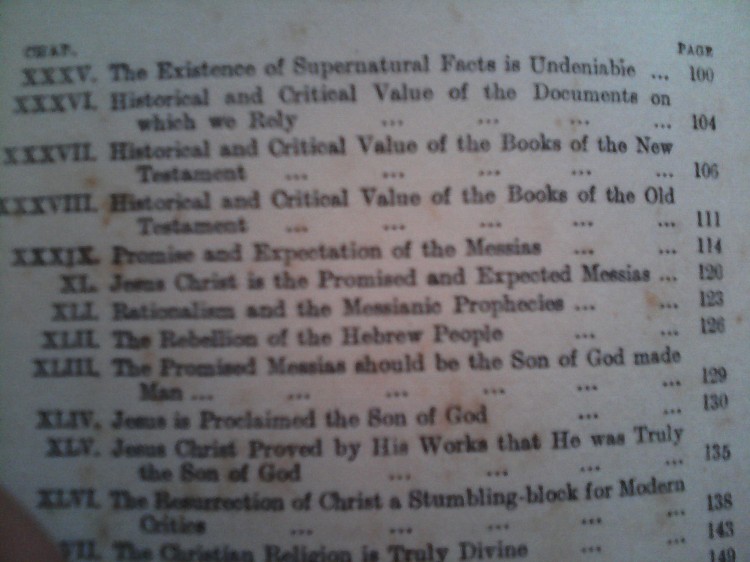 Like the Prof at the beginning of the 20th century, believers still talk about “supernatural facts” in the 21st century.

How times change. How times remain the same.

To paraphrase the theology Prof: “At the present day there are great discussions everywhere on matters connected with religion. Unfortunately, it often happens believers are not in a position to remove their difficulties.”